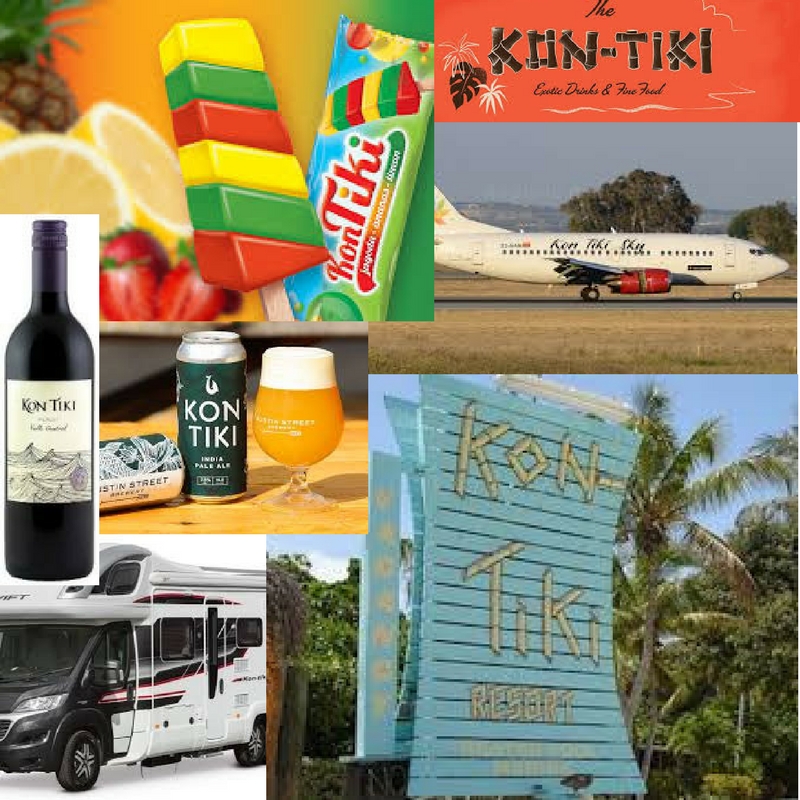 Kon-Tiki is a name that makes most of us think of the exotic and adventurous. Because of that it has been used to name all sorts of things, all over the world, just look at the image above.

The name Kon-Tiki was found out by the Norwegian adventurer Thor Heyerdahl when he needed a name for his raft, that he and his team used for sailing from South America to Polynesia in 1948.

For one thing it was very clever to give the raft a name to sort of make it the main charachter of the adventure. And also to come up with a word that feels a bit strange but is easy to pronounce and remember and it makes us curious.

Thor Heyerdahl never trademarked the name but if he had maybe he could have made big money from it, but on the other hand it might not have spread the way it did.

The expedition became a huge success in a way no one could ever expect or plan for and it continues to inspire people all over the world. It is sort of the wet dream for any modern day adventurer, but also scientists and researchers in archeology and other fields has found their careers thanks to him.

Right now I’m editing episode 2 of The Archives Podcast and this time the focus is on the The Adventurer archetype.

I visited The Kon-Tiki Museum in Oslo and interviewed Reidar Solsvik, curator, about Thor Heyerdahl. We talked about how Thor Heyerdahl became an adventurer and all the factors and mindsets that made him succeed and also a wealthy man. Naming his raft Kon-Tiki was only one of them, but something to learn from.

”Explorers are just kids that don’t grow up”

The episode will be released in a few days and you don’t want to miss it so make sure to subscribe to my newsletter over at archivespodcast.com to be notified when it’s out.

PS. If you have ’start a podcast’ as a goal for 2018 and want to make that a reality and not only a thing on your list I’m here to help you make it a truly good one. Contact me!

"I have no special talents, I'm just passionately curious."